THE PORTRAIT OF AN IDIOT

Painting has landed in the field of contemporary art showcasing a resistant quality. Stretching out of the picture-frame and spilling all over the floor the medial understanding that surrounds painting’s conditions within the context of today’s varied image-making practices has managed to succeed Modernity’s self-referential definitions of the medium. Drifting away from the search of purity and the independence from the outside world, which largely shaped the medium’s perceptions and theorization under the scope of European Modernism, painting since the 70s has emphasized its own circulation networks, or is perceived as such according to mainstream theory and criticism. Exceeding its own framework and material limitations the medium managed to go through the uncanny darkness surrounding art’s stance since the rise of postmodernism, or poststructuralism for the English-speaking Academia.

Modern technological innovations, display devices and reproduction processes helped stir the medium towards the outside, as opposed to a yearn for some modernist internal retreat. The condition of painting being beside itself has gained an ever-powerful mainstream appeal since it was first formulated by David Joselit almost 20 years ago. Circuits of rearticulation, images that flow from one environment to the next, contribute a diverse and ever changing media ecology that surpasses our once limited conception of the medium’s history and contexts. Painting has incorporated its own impossibilities and criticisms and has been reconfigured whilst appearing through the tilted looking glass of contemporaneity. Regardless, the paradigm that provided the only point of reference for painting’s expressions still breathes loud and proud. Canvases, pigments, gazes and institution have not gone extinct but managed to spread over an expanded field of practices, materials and politics.
Relating to the notion of a painting that’s self-aware of its own reflections, one that is in a sense constantly reflecting on the concept of its reconfiguration, the principle of an ironic, satiric and critical painterly fabric has emerged. Across those lines the work of Bradley Davies, British painter born in 1990 and currently living and working in Germany, proves particularly relevant.
They Could Be Dead As Well (2017), a part of Davies’ Stamp Painting series, depicts an arrangement of stamps that appear laying on top or before a bright yellow background. The painting measures 135 x 145 cm and consists of oil, acrylics and ink applied on linen. The origins of the individual stamps vary; some come from the UK, from New Zealand and from Germany, whereas particularly interesting is a rare stamp from the Republic of Upper Volta, the former Name of Burkina Faso that was renamed after 1984. The name relates to different periods of western African history, dating back to the early 20th century and the French Haute Volta colonies that were part of part of the French West Africa. It wasn’t until after WWII that the country gradually started to move towards self-governance, which she finally gained in 1958. The history of its postal services, and mostly the politics that surround it, reflects a set of important aspects of circuits and machines regarding image-circulation networks. For the picture-frame of the stamp, a unit that’s by conception designed to bureaucratize and control the routes, directions and rules of information, incorporates another stamp laying on top of a black background, both commemorating the bicentenary anniversary for the Independence of the United States. 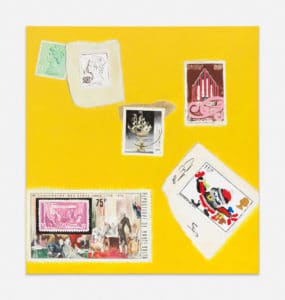 Davies curates a selection of image-signs, arranges them in relation the each other and inserts them into the painterly process. But this time the textual element and sign prospects of the appropriated images step inside the work’s logic as a way of visualizing its own networked condition; one that had to take its last exit out of the canvas so it can reenter. A form of the medium appears; painting as a closed unity in the sense of painting existing within the frame of the canvas that draws inside its logic the codes and images of the outside, while doing its best to keep them intact. In that way Davies works in that sense more or less like an orchestra conductor, or a DJ sampling royalty free music.
The same could be also argued with regards to Davies’ so-called Pasta Paintings. Using a technique known to children and moms alike across the world, Davies created actual pasta paintings, using pasta, glue and cardboard, in order to portray the faces of infamous dictators and political assholes alike. He then proceeded to meticulously transfer set portraits to the canvas. The symbolism and power of these kinds of political portraiture is evident throughout a plethora of examples, from Hitler, Stalin and Mussolini, to Donald Trump and Kaddafi. Yet Davies’ decision to employ a naïve method has severe consequences. 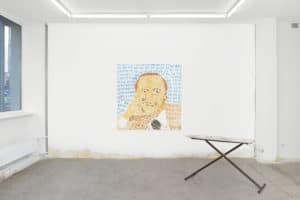 The portrait a village idiot, composed by painted pasta, exposes set idiot to the bone, and functions as an argumentative satirical tool, while at the same time alluding to the conduits of circulation on which the medium of painting has been stepping on since the late 80s, early 90s. For it was Martin Kippenberger who famously, or for some drenched in total infamy, one said that, the most important part of painting is not something that remains trapped within the closed barriers of a picture-frame, but everything around it; the system, the ecology, the dance of agency and even the pasta that the painter had for lunch.
The lost power of wit allows for Bradley Davies to move in and out of a networked condition of the medium while avoiding the common depolitization of media discourses. Because its only by painting world class assholes with an irony integral to Italian curbs that one might one day in the near future have the chance to eloquently utter the words “Fuck You” with a sumptuous smile smudged across the face and proud a middle finger deep inside one’s left coat pocket.