ON LOOP – Dealing with fragmentations and subversion in Oliver Husain’s Video practice.

08 Mrz ON LOOP – Dealing with fragmentations and subversion in Oliver Husain’s Video practice.

Dealing with fragmentations and subversion in Oliver Husain’s Video practice.

He’s hiding something, he shouldn’t be trusted. What if he turns all those horrible pale blue Croc Monsters on us again and we end up freezing to death. Do you know how much a new kidney costs on the pink market? Jeez Louise, you’re killing me! You are literally killing me.

Do you know how much a new kidney costs on the pink market? Jeez Louise, you’re killing me! You are literally killing me.

Oliver Husain is a curious moustache wearing Toronto based snail. His practice, grounded upon the power of fragments, moves in and out of the status of a filmic apparatus and an immersive environment. Ranging from film projects, from his early 00s trilogy Swivel, Shrivel and Squiggle (2005) and Purfled Promises (2009), Dear What’s Your Face (2010) to the most recent French Exit (2018), his work encompasses an array of different media, languages and references in an attempt to lure its viewers into the chaos, confusion, puffiness and madness. Conceptualized as a form of documentation or build-in narration, the power of the camera lies on its way of engaging the eyesight field of its subjects. Remaining seated in a black box environment with our heads looking forward our perspective field, in its strict Wittgenstein ideal, coincides with that of the screen. You see what you see, because there isn’t anything else to look at. This reflects more or less the way we are accustomed to experiencing film, both inside the context of art, as well as outside. The production of space, as an illusionistic projection onto the flat screen, crashes into the actual space and merges with reality. The limits of where one ends and the other one begins come crashing into each other. Utilizing those qualities his medium provides him with, Husain argues for alter imaginations and media histories regarding the tricky subject of mixing construction with the real. Produced as a collaborative project his work doesn’t seem to follow a tradition artist – artwork – creation lineage but takes the form of a broader group effort. Instead of an individual one and only artist that spits out one commodity after the other, Husain works as a chain of a distributed system, which can only achieve its goal through the wonders of interaction.

She began with a room all of her own and made her way towards the pits of hell and the then she met a tall dark know it all who broke her heart and made her obsess over the pale blue tiles that covered her parents bathroom floor.

It is often the case that Husain’s children of doom and their media theoretical day dreams are, presented on the occasion of an art space, played on loop. Again and again, jumping up and down, wailing left and right, till the fat lady sings, his crowd never stops smiling.

You will one day cross an empty city street and find yourself over to the other side, and it’s going to be filled with walking beasts and flying crocs and swimming dreams and wet raincoat fights, the ones that made you think of your mom, and air condition units climbing on the sides of buildings. Pirates from the future and astronauts of the prehistoric age, angry customer service representatives and brides screaming to their husbands and boys crying on the floor and bringing the sky down.

The concept of showcasing a video piece on loop, either played on a screen or projected onto a larger surface, may seem something quite innocent, even unimportant at a first glance. For some it might allude to the power of the system and the impact of the market. A work of art, regardless of its medium, once presented within the networks of the system is bound to be seen, heard and not so often touched according to a set of rules. A sort of users guidelines that define its entrance / life / and coming exit from the shadows of a systemic structure that can’t be tamed. Just played it again and again and again till you’re done, till the show’s over and you are no longer needed.

Yet, Husains repetition becomes part of the system with the clear intention of subverting it. It has been argued in the past, to such an extent that contemporary criticism largely derives from that single idea, that every work of art is inherently subversive. A hollow shadow of its self that’s a priori defined as something referencing its own past lives, making the question of contemporaneity all the more perplex and intriguing. The tactic of repeating yourself over and over again isn’t a trick to please your Kafkaesque Masters in their shoulder padded power suits, but becomes a joke against the very system it created it. Even though not always with direct artistic intentions, the intrusive eyesight on the world of advertisement and real estate, or a pair of naughty cats scratching each other’s bellies and a group of tinny dancers, Husain’s films almost transcend into the realm of an honest and sharp political argument.

But, since there’s no one here shouting or throwing manifestos from the top of buildings or narrating grand tales about men and their rooms that they had all by themselves for so long, the lesson must be repeated. One minute there, here and then, they disappear. By repeating himself over and over again, the artist takes advantage of this market imposed pragmatism, makes it his own and turns it around. The modalities of his medium of choice seem ideal and serve their subversive purpose. The small seemingly unimportant details, minuscule fragments of a distorted whole that we are unable to process, begin to surface. A gesture, a broken smile that expired a week ago, the colors on an 8 shaped dress, the view from that building up above, or even the colonial heritage and the malice of confronting it, they all appear and then go into hiding. And its through that same repetitive action, the process of re-production, that Husain’s political jokes land.

Loop – and they might make it to our ears. Loop – and the snail will help them cross the street and make it safely over to the other side. 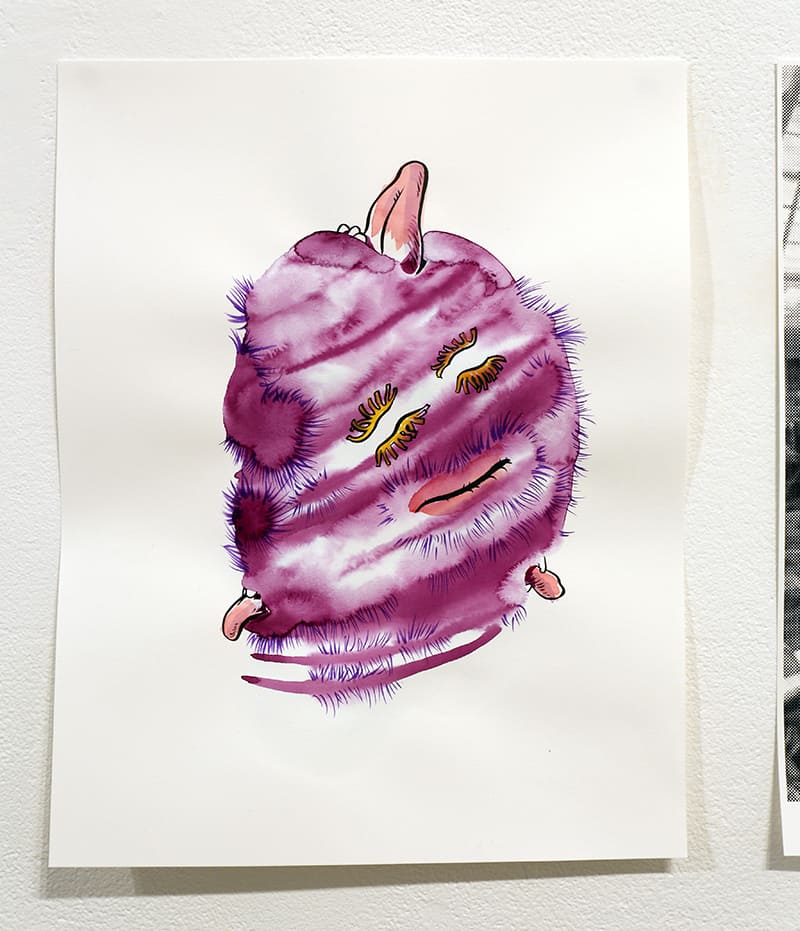